These three graphs below show that obesity cannot be attributed to sugar and other carbohydrates. But if sugar and carbs cannot be blamed, what makes people so fat? It’s the fat. The human body stores any excess dietary fat. The fat you eat is the fat you wear.

That’s why it’s a good idea to reduce your consumption of fatty desserts 🚫🍩🍪🎂🍰🍦🍫, animal products🚫🍖🧀🥩🥚🥓🥛🍤🍗🍣 and vegetable oils as much as possible.

But you can eat as many carbs as you want until you feel satisfied.👍🌽🍌🍠🍚🍉🥔🍝

Check my comprehensive article “Sugar is not the bad guy” and the video “What causes insulin resistance” on YouTube.

Becoming a better version of yourself does not involve controlling everything. This is more about picking the right direction and enjoying the journey. You will find plenty of surprises, tests, lessons and challenges when you leave your comfort zone, but this is the place where the fun happens.

Tricking yourself is a good strategy for a positive change. If people try to manipulate you, use your judgment, ask for proof and never take things too personally.

Let’s check what researchers have found about the health of people who lived in very cold climates, like Inuits. These populations are known to have a meat-based diet. Sources are listed at the end of this article.

Ötzi the Iceman, found frozen in the Alps, had gallstones, hardened arteries and fatty streaks in his arteries, which is the first sign of atherosclerosis.

Researchers examining the content of his stomach worked out that his final meal consisted of venison and ibex meat.

The Westernization of their diets actually lowered their rates of heart disease. You know your diet is bad when the arrival of Twinkies improves your health.

Meat doesn’t get any more organic than that and it still caused heart disease! Even climbing mountains couldn’t protect him from heart disease. Because all meat comes with artery clogging substances like cholesterol and saturated fats.

Same goes for all Inuits who eat mostly wild caught meat and basically no fruits and vegetables. The totality of evidence from actual clinical investigations, autopsies and imaging techniques is that they have the same plague of coronary artery disease than non Inuit populations have, and actually have twice the fatal stroke rate and don’t live particularly long.

Another example from 500 years ago, an Inuit woman in her early 40’s – atherosclerosis in her aorta and coronary arteries.

In the popular and widely used Atkins diet, the body burns fat as its main fuel. This process produces ketosis and hence increased levels of beta-hydroxybutyrate (BOB) acetoacetate (AcAc) and its by-products acetone and acetol. These products are potential precursors of the glycotoxin methylglyoxal. Since methylglyoxal and its byproducts are recognized as a significant cause of blood vessel and tissue damage, we measured methylglyoxal, acetone, and acetol in subjects on the Atkins diet. We found that by 14-28 days, methylghyoxal levels rose 1.67-fold (P = 0.039) and acetol and acetone levels increased 2.7- and 6.12-fold, respectively (P = 0.012 and 0.028). Samples from subjects with ketosis showed even greater increases in methylglyoxal (2.12-fold), as well as acetol and acetone, which increased 4.19- and 7.9-fold, respectively; while no changes were seen in samples from noncompliant, nonketotic subjects. The increase in methylglyoxal implies that potential tissue and vascular damage can occur on the Atkins diet and should be considered when choosing a weight-loss program.

Wow, WTG being a radical!  makes you feel so cool!  look up acetone.  Wait, I’ll do it for you.  https://en.wikipedia.org/wiki/Acetone

(CH3)2CO.[12] It is a colorless, volatile, flammable liquid, and is the simplest and smallest ketone.

Acetone is a good solvent for many plastics and some synthetic fibers. It is used for thinning polyester resin, cleaning tools used with it, and dissolving two-part epoxies and superglue before they harden. It is used as one of the volatile components of some paints and varnishes. As a heavy-duty degreaser, it is useful in the preparation of metal prior to painting.

Ingestion Prevention Do not eat, drink, or smoke during work. Wash hands before eating.

For more reading on the dangers of a high fat diet.

Once again, this is how we screwed up our diet.

So you can go Keto and AT LEAST cut out 34% flours + 7% sugars = 41% reduction off 1970s or go HCLF and AT LEAST cut out the 48% of added fats or you could go Whole Starch Low Fat and cut BOTH OFF and follow a diet recommended by the consensus of over 400 top health professionals in the world.

Take the olive branch here 🙂 take the best of both worlds.  Its a sane foundation you can build to your own uniqueness despite the fact we are all the same species.

The DNA of all human beings living today is 99.9% alike

This is a short text, written by Dr McMacken, that is easy to share with the people you care about.

Five reasons why physicians that read studies do not recommend the keto diet.

(Scientific references are below the article.)

1. That we know of, no population in history has ever thrived on a very-low-carb/high-fat diet. There is exactly zero scientific evidence that a keto diet is conducive to longevity & longstanding vitality – unlike a plant-centric diet, the foundation of the longest-lived people on earth.
2. A keto diet may cause short-term weight loss, but possibly at a serious price. A 2010 review found that low-carb, animal-based diets increased cardiovascular death by 14%, cancer death by 28%, & all-cause mortality by 23%- trends confirmed in other large studies.
3. A keto diet hasn’t been shown to prevent, control, or reverse type 2 diabetes in the long run. Avoiding carbs will temporarily lower your blood sugar if you have diabetes. But this simply masks the underlying problem, which is insulin resistance – ie, glucose in our blood can’t enter our cells & the liver overproduces sugar. This is NOT the fault of carbs from healthy foods – whole grains, legumes, fruit, or even starchy vegetables. In fact, a high-carb, high-fiber, plant-based diet is exceptionally protective against diabetes & can actually REVERSE insulin resistance & lower diabetes complications. In contrast, low-carb diets can promote diabetes over time, as they foster inflammation & fat buildup in our cells, causing insulin resistance.
4. Keto diet research is in its infancy, focusing on short-term blood results & body weight – not actual rates of disease or death. And some findings are concerning. LDL cholesterol levels tend to rise (or at best, stay the same) on keto diets. An overwhelming wealth of research shows that the higher the LDL, the higher the risk of cardiovascular disease.
5. A keto diet is low in refined grains & added sugar. But it also can be low in phytonutrients, antioxidants, & fiber, all of which have profound benefits, and it forbids some of the most powerfully health-promoting foods on earth – whole grains, legumes, & many fruits. To me, that’s just not good medicine. 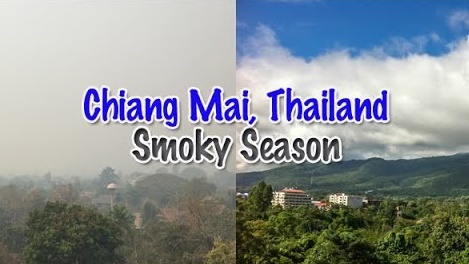 Now, take a look at these graphs (screenshots made on March 29th, 2018). Do these figures appear normal to you?

Why is the air quality in Chiang Mai much worse than in Bangkok (capital of Thailand)? As Bangkok is a town much bigger than Chiang Mai, it should more polluted because of its traffic, right? There must be another major cause of pollution. Traffic emissions cannot explain why Chiang Mai is so polluted during the “smoke season.”

The smoke is visible and people experience health issues in Chiang Mai. You’ll see many people wearing masks to filter the particles. I do not wear such masks as I do not feel any symptom, even when I ride my bicycle. 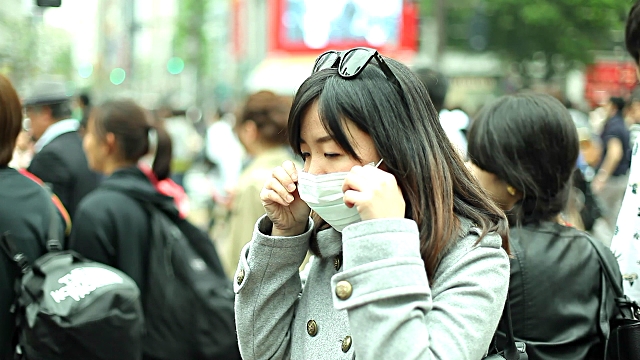 For starters, farmers are used to burn fields and brush to get ready for a new season of crops, this persistent habit generates huge amounts of smoke. Authorities are currently working on projects of biocharovens, which could fix part of the smog problem. Look at these burnt corn cobs. They are burnt massively around Chiang Mai and cause lots of smoke. There are many pig farms in Chiang Mai province. These pigs are fed with corn, and then the farmers burn the cobs outside in the open air.

Unlike in former times, Thai people eat lotssss of pig meat nowadays. There’s meat literally everywhere in Chiang Mai. Barbecued meat is being prepared on every street corner as of 7 a.m. More smoke thanks to BBQ’s…

Eating animal products involves growing much more plants than eating plants directly. It makes sense, as you have to feed the cattle. The human population is too big to keep playing hunters. Humans don’t hunt, they buy pieces of dead exploited animals. Animal agriculture is detrimental for the planet and human health. Protein is actually very easy to get in a plant-based diet. But if you care about protein deficiency, check the protein efficiency diagram below. Vegan meals are not boring. I became passionate about food when I became a vegan:
Mouth-watering foods that are actually healthy
And Best FRUIT ART you’ll ever see

To end on a positive note:
A great thing in Thailand is the plentiful number of vegetarian restaurants spread in the whole country. You can identify them by their sign, pronounced “jay”, which looks like the number “17”. Chiang Mai is also known as one of the vegan capitals in the world. Check these vegan/vegetarian restaurants on the mobile app HappyCow. Every time you spend money, you promote an industry.

Do you want to be part of the problem of part of the solution?
This is a choice you can make on a daily basis:
• by using a bicycle, common transports or your legs instead of a car/motorbike;
• by eating plants instead of animal products;
• by buying only what you really need;
• by refusing plastic bags and other single-use plastics;
etc.

Do you want me to write an article about minimalism?01

This is the best salad I’ve ever had. Here is the recipe. 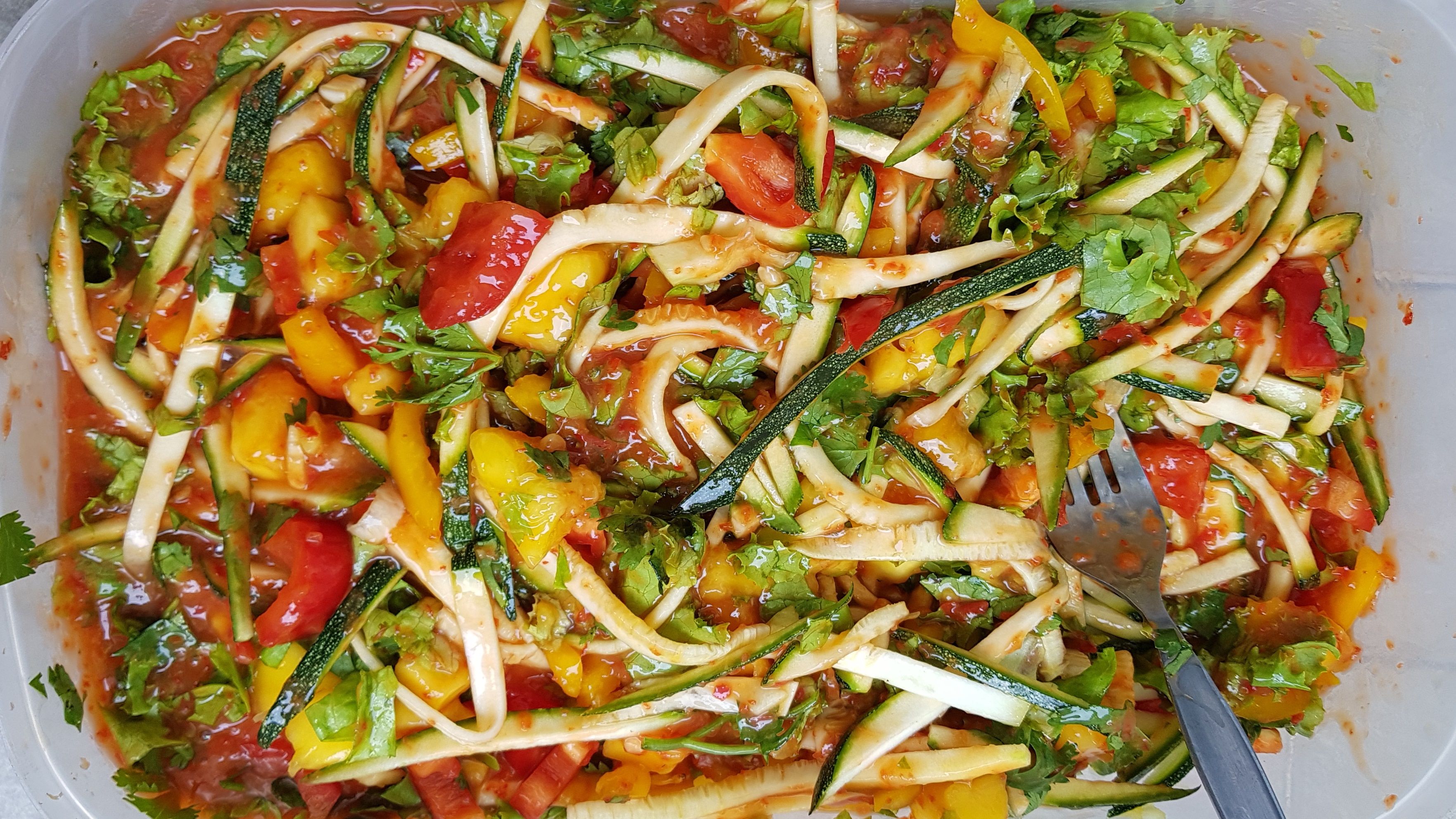 Here are the ingredients you’ll need for 1 person: 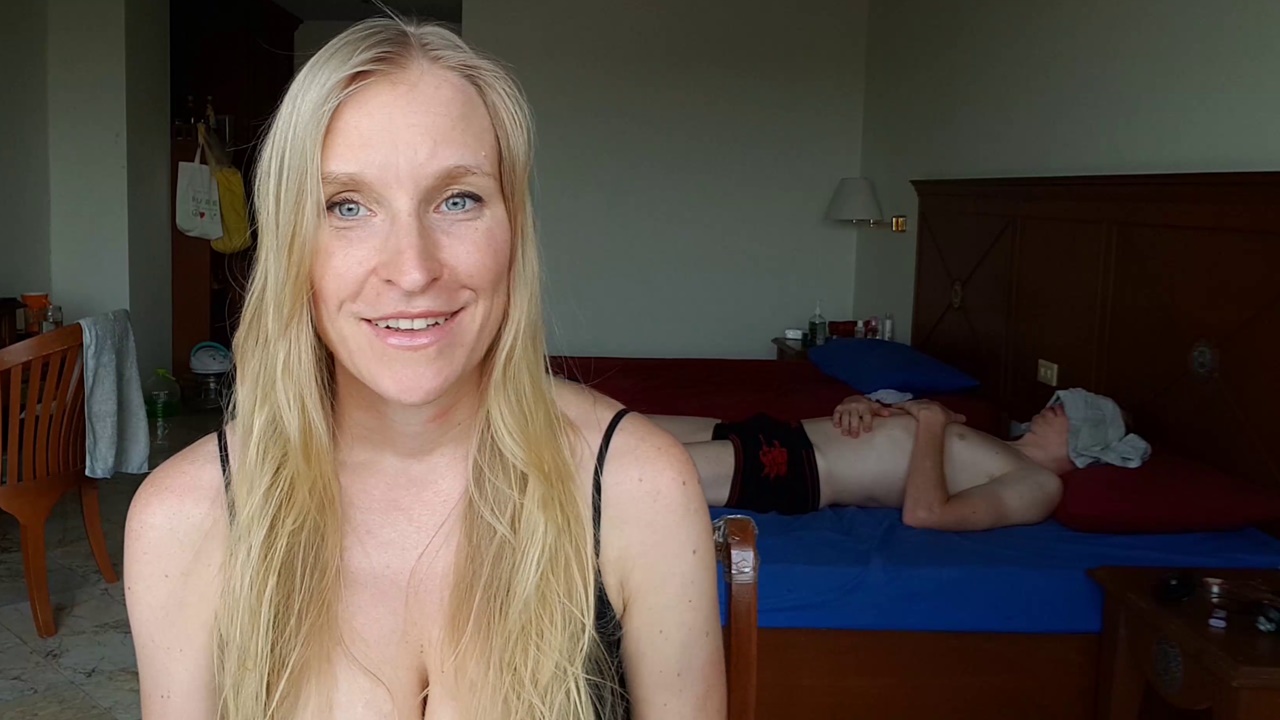 There was an error retrieving images from Instagram. An attempt will be remade in a few minutes.

Sugar Made Me Lean
Create a free website or blog at WordPress.com.